There is this book you should read. 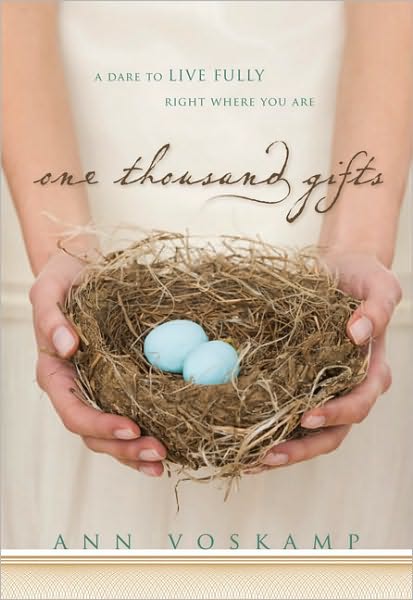 It talks about that true joy is found in thanksgiving. The kind of thanksgiving that comes even when your world doesn’t seem like it could get any worse.

The author is challenged to find one thousand things that she is thankful for and make a list.

Could you do it?

This book has been on my heart ever since it was gifted to me about a year ago. It stays with you. The idea that you could be happier, if you were more thankful. Is it true? Does gratitude make us happier?

Then, there was this video about the Science of Happiness by SoulPancake (who continues to rock our worlds with every video produced.) Go ahead and watch it. You’ll thank me later 😉

It makes you want to call your mom and say thank you, doesn’t it? So, take 5 minutes right now and write someone an email or send someone a note with a simple thank you and why you are thankful for them. It will make their day brighter and for just that 5 minutes, you will be a happier person. In fact, make a calendar reminder to do this once a week or even once a day.

It’s a very specific way to apply the following Scripture to your life:

In the same way, let your light shine before men, so that they may see your good works and give glory to your Father in heaven.

What is one specific way that you show gratitude in your life?

The question of where home is has been heavy on my heart lately. As you know, Chris and I have been living for two years in Germany and will Tuesday morning return to the States. Many people have asked us if we are happy to be going “home”.

Are we happy to see our family and friends?
Yes!

Are we happy to speak English for a little while?
Absolutely.

Are we happy to be going home?

Anyone who has moved can attest to the fact that building a new home is something very complicated. You leave something comfortable for something that is unknown, that is foreign. When what is foreign also speaks a different language and boasts a completely different culture, you have reached a whole new level of complicated.

An American friend of ours living in Germany says that she was raised in America but grew up in Germany. After the last two years, we can understand exactly what she means. When you start with nothing, not even words, you grow up really fast. You learn the strength of your own character, you learn your limits, and most importantly, you learn what home truly means.

So, to answer your questions: We are happy to be going home, but we are sad, in the same breath, to be leaving home.

What is your definition of home? #homeis

In case you haven’t picked up on it before, a very important part of German culture is throwing parties! One of the most important of those parties is a goodbye party. As with typical German culture, you throw this party yourself and it is a way to honor all of the people in your life and have one last “hurrah” together! Since our two years has sadly come to an end, this was a very important event for us. Over the last two years, there have been so many people here that have supported us, and we wanted to make this part something to show them how much they meant to us! To me, of course, what makes something really special is photographs. To Germans, something really special is an afternoon grilling together. So, we combined the two. We invited everyone to the church for an afternoon of grilling. Then, we sifted through all of our photos for the last 2 years and printed off only about 5% of them. But, it was a small way to remind people of all the good times that we had together and think about all of the wonderful experiences we were able to have during these two years. We also wrote a note to our guests thanking them for their love, support, and friendship. We had a great time and some great food and it was a great way to celebrate the last two years with some very special people! Take a look: Special thanks to Meagan Wallace for the beautiful photographs! 😀

This week, I was featured over at Ren’s Family Blog! Thanks so much for featuring my post about 5 Books You Should Read Immediately!

In honor of being featured, I decided it was about time to put up my review of one of those books that you should be reading immediately. And of course, that book is Bread and Wine by Shauna Niequist. If you have been talking to me at all in the past few weeks, you have heard about this book.

Bread and Wine is “a love letter to life around the table.” It is Shauna’s memoir of how her love for food is something that has throughout her life brought people together, helped her family to develop precious friendships and taught them how to serve the people they love. Its broken up in to short stories that are memories of how food and gathering around the table has truly affected her life. And as a bonus every story comes with a fantastic recipe like this Blueberry Crisp: In the beginning of Bread and Wine, Shauna writes about a common conversation between musicians who sit around discussing songs they love wishing they were their own. I couldn’t help but think that’s exactly how I feel about Bread and Wine. This book is the book that I wish I had written and it is one I will be reading over and over again. Shauna’s writing is beautiful, emotional and captivates you from page one like a conversation with a good friend over coffee. Although the book is filled with real life stories about her struggles and problems, its also filled with romantic stories of deep friendships, cooking clubs, and of course, the ultimate message, of coming together around the table.

The title Bread and Wine comes from the most important table gathering, which is when we gather around the communion table and take the bread and wine in remembrance of Christ. This is an importance message throughout the book reminding us not only of our weakness as humans and need for food, as we need Christ, but also the opposite. We, as humans, cannot only live on food but we thrive on the Word of God, our relationship with Him and our relationship with others. And that is ultimately what gathering around the table is about.  So, now pick up your copy of Bread and Wine and follow Shauna’s advice:

Gather the people you love around your table and feed them with love and honesty and creativity, because there will be a day when it all falls apart.

These are things I can’t change. Not one of them. Can’t fix, can’t heal, can’t put the broken pieces back together. But what I can do is offer myself, wholehearted and present, to walk with the people I love through the fear and the mess. That’s all any of us can do. That’s what we’re here for.

Who are you going to invite to gather around your table?

You may find us linking up this post at one of these great blogs!